How much is AIM worth to the UK?

In 20 years, the AIM Market has become the growth market for young, dynamic, innovative companies. Here we highlight how much the AIM market contributes to the UK economy.

Since its launch in 1995 as a platform for dynamic growth companies seeking to raise equity capital, AIM has grown to become the most successful growth market in the world. It is now an established part of the funding ecosystem in the UK, supporting innovation, driving productivity and creating employment.

Our report, commissioned by the London Stock Exchange, quantifies the scale and nature of AIM’s contribution to the UK economy. Download the full report or review the headline figures in our summary below (click on the graphic to view a larger version – opens in a new window). 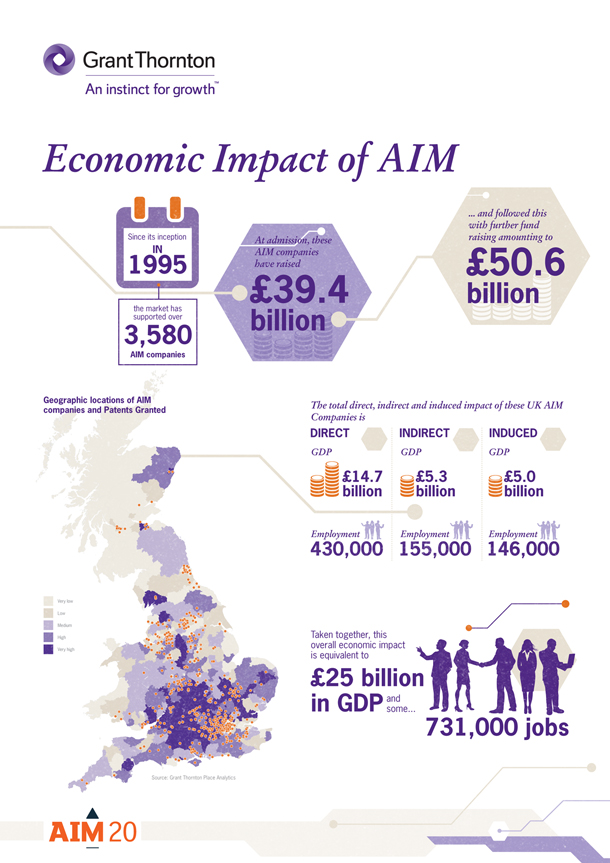 “The economic contribution AIM makes to UK plc is clear,” says Philip Secrett, head of Public Company Advisory at Grant Thornton. “The ongoing government support of AIM as a market for young, dynamic companies has been critical with recent measures, such as the removal of stamp duty on AIM shares and the inclusion of AIM shares in ISAs, further supporting the development of the market and in turn, generating a material contribution to the UK economy.”

Marcus Stuttard, head of AIM, added: “As we celebrate AIM’s 20th anniversary, this report demonstrates that the market’s value extends far beyond the support it provides to ambitious, entrepreneurial companies across the UK. The figures present a picture of a market that serves not just its quoted companies and their advisers, but the country as a whole.”

The full report is available to download: Economic impact of AIM [ 3689 kb ].