The government's desires to align taxation of UK non-doms more closely with other residents, whilst encouraging them to remain in the UK and invest has triggered further legislative changes

Following the recent consultation document and draft legislation around the planned changes to the taxation of non-UK domiciled individuals from April 2017, a series of meetings between interested stakeholders, HM Revenue and Customs (HMRC) and HM Treasury have taken place, which have included consideration of an alternative approach to that set out in the consultation documents.  We consider the direction of travel for these proposals as far as they affect offshore trust structures with UK resident and non-dom settlors.

One of the areas of the planned reforms to the taxation of non-UK domiciliaries (non-doms) that has been subject to the most change as part of the consultation process so far has been the taxation of trusts established by non-doms before April 2017.

In large part this stems from the desire of the Government to satisfy potentially conflicting aims – to bring the taxation of the UK's non-dom population more closely into line with that of its other residents, whilst simultaneously trying to encourage them to remain in the UK and to invest in the UK economy.

This briefing note considers where the treatment of these trusts and their beneficiaries might end up based on the latest proposals discussed at consultation meetings with representatives of various professional bodies, HM Treasury and HMRC. 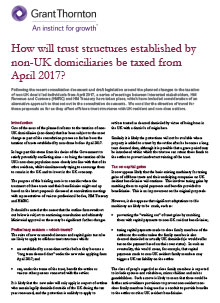