Government broadband funding: where to invest it?

During this year’s budget, Rishi Sunak confirmed that the government will pump £5 billion into rolling out full-fibre broadband across the UK as part of its commitment to ‘level up’ the UK, Rob Turner explains. The aim of this investment is to make sure that "gigabit-capable broadband" is able to reach every UK home by the end of 2025, with particular focus on those “hardest-to-reach places”.

However, at local authority level, this percentage can vary quite considerably and some areas are lagging significantly behind others.

The proportion of premises with superfast/ultrafast broadband ranges from 53.9% in the lowest-performing authority, up to 99.8% in the best-performing authority. To make sure that funding is targeted in the most-efficient way and with the greatest impact, it is important to consider wider socio-economic conditions alongside existing broadband connectivity.

Despite improvements in broadband connectivity, there continues to be an urban/rural divide2. To assess this at a local authority level across the UK we have used population density as a proxy for rurality, as there is no consistent rural/urban definition for the UK. 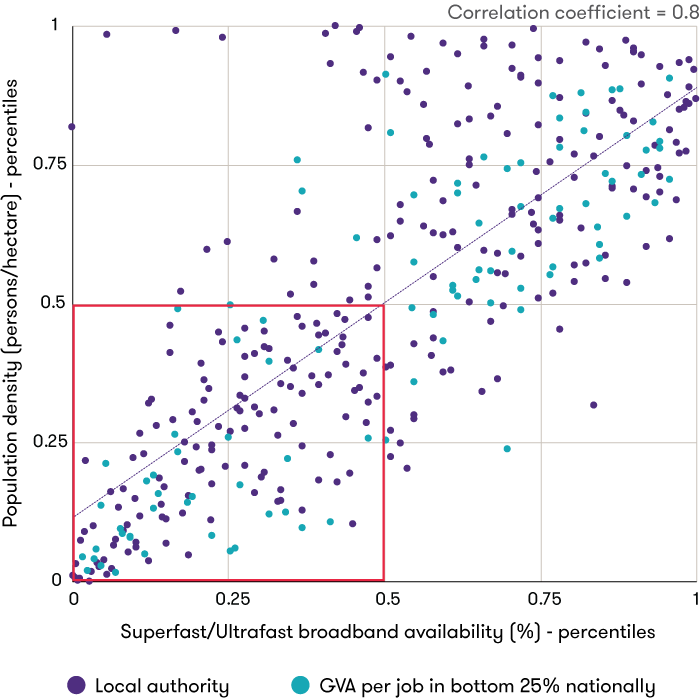 The chart above shows that there is a strong positive correlation between these two factors with areas in the bottom-left quadrant of the chart having a lower proportion of premises with superfast/ultrafast broadband and a lower population density, suggesting higher rurality.

There are, however, clear outliers, such as the cluster of areas in the top-left corner, which have low superfast/ultrafast availability and yet a high population density, which includes City of London, Westminster and Tower Hamlets. Other outliers include Lancaster City, which conversely has high levels of superfast/ultrafast broadband and yet a low population density, suggesting higher rurality.

In addition, we have highlighted areas that have productivity levels (GVA per job) in the bottom 25% nationally. This helps us to identify areas that are not only hard to reach, but suffer from low economic productivity.

The information below reveals the local authorities that suffer from low productivity, low broadband connectivity and are more rural. Taken together, this would suggest that these areas should be at the front of the queue for the new investment.

To find out more about how data can enhance and underpin your case for infrastructure investment, contact Rob Turner.

Budget 2020: preparing for coronavirus and investing in infrastructure