Discover the key trends in European Commission merger decisions and how the regulatory landscape is changing for pan-European M&A.

Merger control is an important part of the regulatory landscape for those embarking on M&A activity, but especially so when consolidation is in markets with a reducing number of key players. In 2018, we looked at the trends in merger decisions by both the UK regulators, the CMA, and the European Commission. We continue to report on an annual basis on the five-year trend in merger cases filed with the EC (based on the latest decision date). Key trends on EC merger decisions in the current period are: 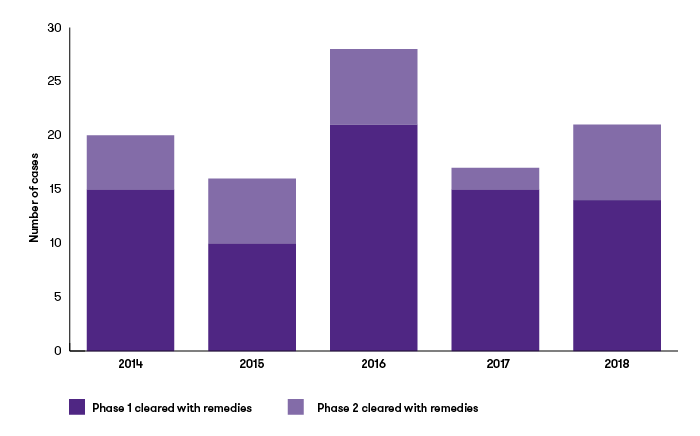 The number of merger cases reviewed by the EC has plateaued at around 360. This follows significant growth from 303 in 2014 to 358 in 2016. In 2018 there has been a significant reduction in the number of full form filings; simplified filings continue to take up an increasing percentage of total filings, increasing from 69% in 2014 to 78% in 2019.

Over the five-year period, 256 of the mergers were in the manufacturing sector – accounting for more than 50% of the full form filings. Of those cases, 62 (24%) required remedies: 50 at Phase 1 and 12 at Phase 2. These cases include the recent Praxair/Linde, Bayer/Monsanto and Thales/Gemalto which saw remedies agreed in a number of jurisdictions.

Other sectors with a relatively large number of filings over the five-year period include:

Increase in number of multi-jurisdictional cases

Over the last five years of the merger cases receiving conditional approval, 25 (25%) of those cases have seen remedies agreed by more than one merger control regulator: 17 were EC Phase 1 cases and eight EC Phase 2 cases. This follows the increase in global merger activity.

In terms of the number of mergers cleared, subject to remedies agreed with multiple regulators, the highest have been:

Rise in number of Phase 2 cases cleared without remedies

Increase in number of mergers prohibited

Over the five-year period, five mergers have been prohibited. However, the increased level of prohibitions is not attributed to any specific reasons:

With around 70% of remedies relating to divestments over the five-year period, divestment commitments remain the most popular remedy. This is in line with the Commission’s viewpoint as set out in its EC Merger Regulation.

In respect of non-traditional divestment remedies, while the use of remedies that remove links with competitors had previously become increasingly popular in 2016 and 2017, there is no indication that this is a growing trend.

In respect of the divestment remedies, the requirement for an upfront buyer appears to be increasingly popular, which prevents the main merger from completing until the divestment commitment has been met.

If you would like to understand more about our monitoring trustee services, including our experience in advising on governance and controls required to ensure adherence to interim measures, please contact Craig Reed.