Electric vehicles (EVs) are quickly becoming less of a novelty, and more of a valid option for the everyday motorist, propelled by cross-party commitment to reduce carbon emissions and corporate social responsibility initiatives.

In recent years the UK government has set several ambitious targets to increase the use of EVs in place of petrol and diesel vehicles, with the aim of reducing noise and air pollution. These include a target for all automobiles to be zero emission by 20401, which will require major changes in consumer habits and significant investment in electrical infrastructure, as traditional petrol and diesel service stations adapt to an evolving marketplace.

Climate awareness and public engagement has led to car manufacturers phasing out production of diesel and petrol automobiles and moving towards hybrid and EVs. In January 2018, Ford pledged to invest $11 billion to introduce 24 hybrid and 16 fully electric cars by 20222. This was shortly followed by Honda’s commitment to only sell EVs in Europe by 20253.

EVs have now become one of the cheapest options of vehicles for private firms, underpinned by government support. This has led to companies that carry large mobile fleets transitioning to EVs, in pursuit of a lower operating cost base and pursuit of a zero-carbon footprint. This was demonstrated by Mitie4 in 2018, when the company became the first major UK facilities management provider to launch an electric fleet. The company owns 3,587 compact vans and cars and has promised that 20% will be electric by the end of 2020. We anticipate this trend to continue across adjacent sectors as first movers start to witness the economical and CSR benefits, and public pressure heightens.

Volume of charge stations by type 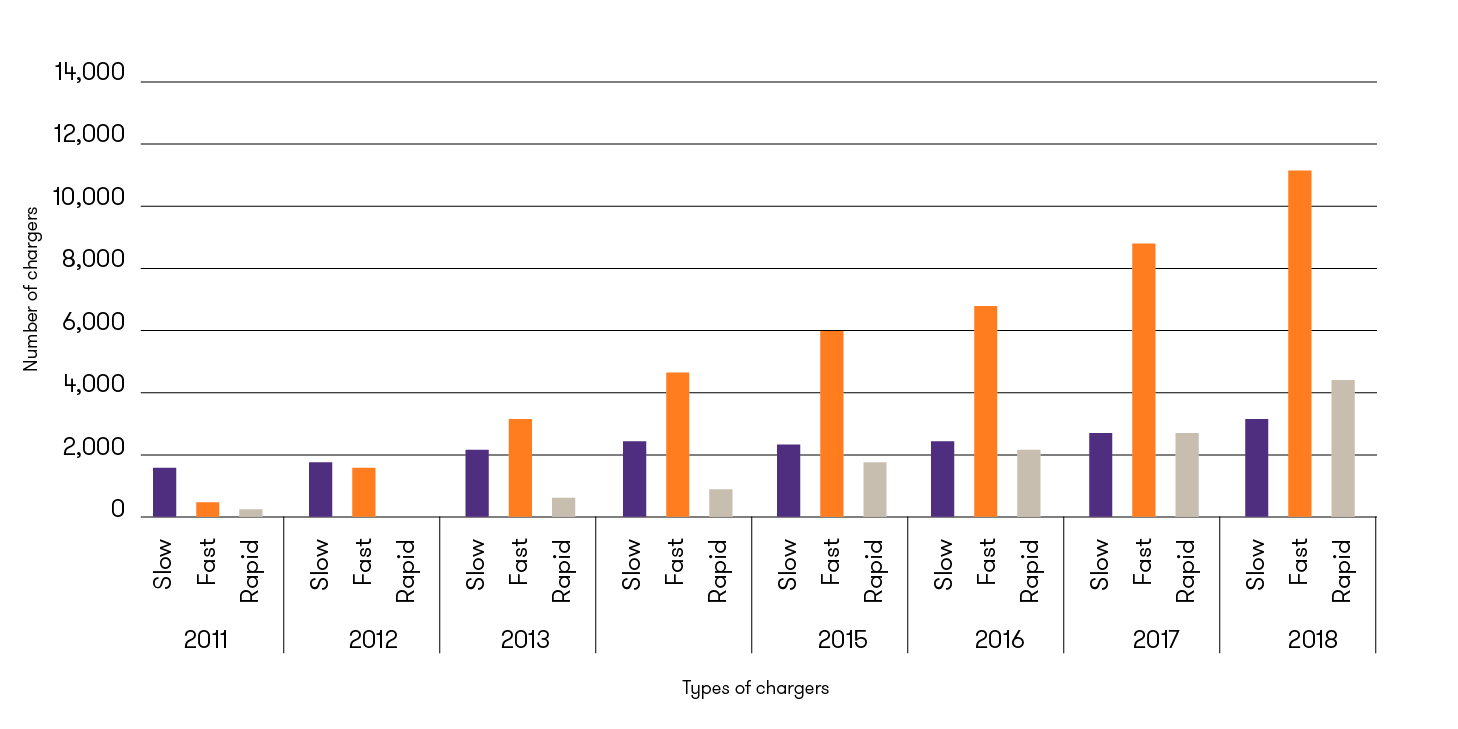 The rapid rise in ultra-low emission vehicles, and more recently EVs, has resulted in the installation of charging points throughout the UK to ensure there is sufficient density to charge nationally. In 2011, there were 34 rapid charging connectors in the UK. As of July 2019, this had increased to over 5,300.

Despite the expansion of electric charging points over the past decade, the infrastructure to support the electrification of vehicles is still considered under-served. In the UK there are currently 20,000 individual charging points to around 223,000 electric vehicles, with a large proportion of these being closed terminals, creating compatibility issues dependent on the vehicle model and chosen charging operator.

To bridge the gap, private initiatives are becoming commonplace, including a joint venture between Daimler, BMW, Ford, and the Volkswagen Group6, that aims to expand the charging network by installing and operating up to 400 stations by 2020 across Europe. This will include the launch of 40 charging stations in the UK.

Public grants for EV charging infrastructure via the Office of Low Emission Vehicles has further supported the roll out, with the government recently committing to home and work chargepoint schemes as part of the Road to Zero Strategy7.

This investment from both the public and private sector has resulted in the rise of capital projects for national suppliers, installers and operators of charging points, in turn leading to an uptick in M&A activity. Notable oil and gas supermajors and utility service companies are increasingly looking to create an end-to-end charging solution for an ever-expanding electric market.

An increasing number of acquisitions across the value chain 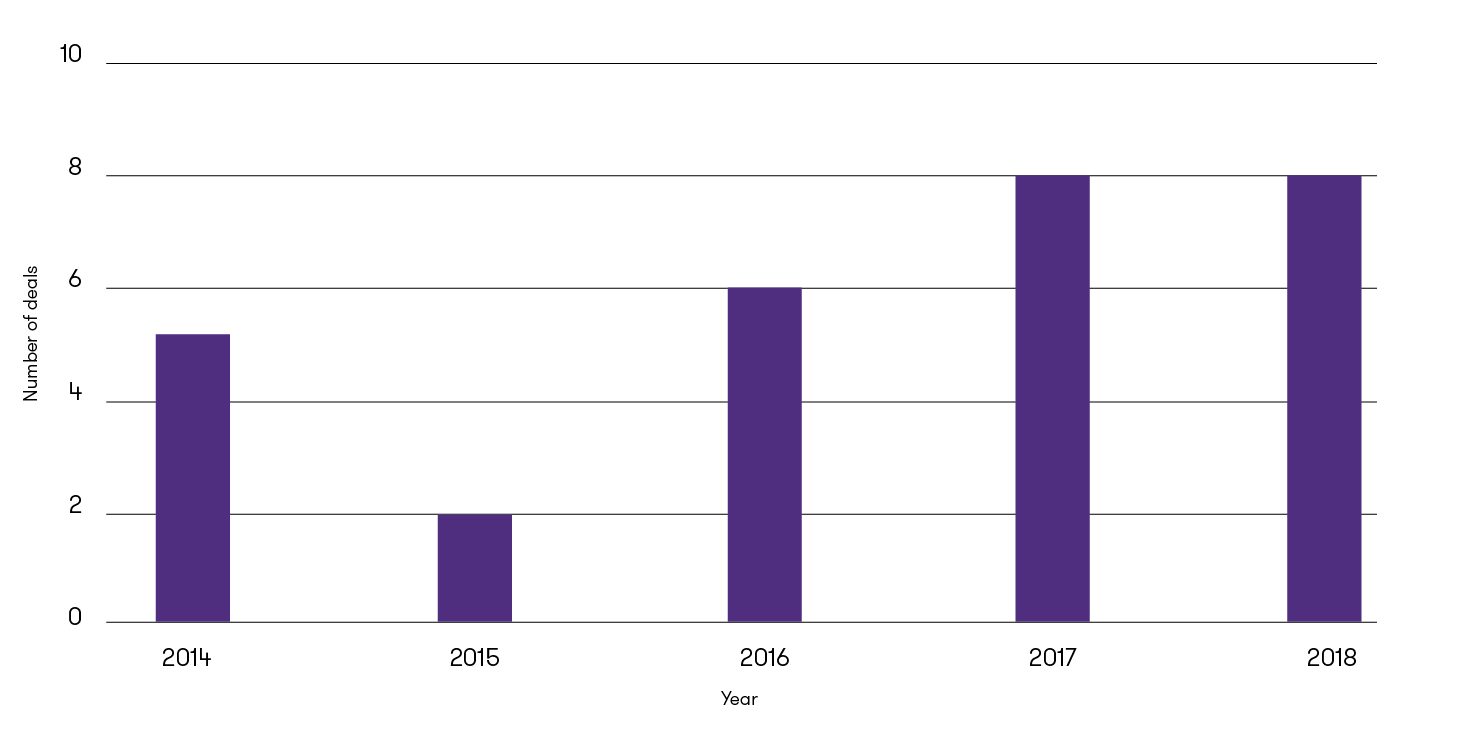 In a recent analysis of M&A activity in the EV space8, our Corporate Finance team identified three main buyer pools. These include oil and gas companies, utility providers and financial investors.

Oil and gas companies are the most active buyer pool, as oil majors look to diversify their product offering towards renewable energies and future-proof traditional petrol and diesel service stations through becoming electric stations.

Charging station manufacturers and operators of scale have become key targets for oil majors over the past five years. In 2017, Shell completed its first deal in the EV market after acquiring New Motion, which manages over 30,000 charging points across Western Europe. This strategic investment has allowed Shell to accelerate its initial plans of installing rapid charging points across its forecourts, preparing itself for an EV-led market.

Rival oil giant BP completed a similar investment through the acquisition of Chargemaster in June 2018 for £130 million, with the chief executive of BP downstream stating “At BP we believe that fast and convenient charging is critical to support the successful adoption of electric vehicles”. The deal provides BP access to over 6,500 charging points and was an important step towards the firm’s aim of being the leading provider of energy to low carbon vehicles. Chargemaster was previously owned by private equity house Beringea LLP, who generated an impressive 43x return following its initial investment in 2014.

ENGIE, a multinational utility company, acquired EV-Box in 2017 and more recently ChargePoint Services for £20 million as the company pursues its ambition to become a leader in green mobility solutions. Combined with the firm’s national operative base of technical engineers, the acquisition of EV charging stations has created a turnkey solution for the UK’s charging infrastructure requirements, from installation to operation.

Deal outlook – so where does M&A activity go from here?

In this fast moving, innovative and disruptive sector, mature corporates throughout the value chain are seeking acquisitions to reinvent their traditional business models. As a result of the tailwinds supporting consumer demand for charging stations, we anticipate an increase in deal volume and higher valuations compared to traditional assets operating within the built environment.

Oil and gas majors will continue to seek smart charging station operators to support the roll out across existing forecourts, and we predict consolidation from original equipment manufacturers as operators seek interoperability with competitors to enhance consumer footfall and meet the surge in consumer demand.

In the wider context of EVs, the most significant limitation to growth is the supporting infrastructure. This has led to greater incentives for new charging operators to enter this space, leading to market fragmentation. As demand continues to evolve, with faster, more accessible and interoperable charging points, we expect the buyer pools to continue their animated M&A strategies in pursuit of creating an end-to-end charging solution.

As ever, we are here to help companies on both sides of the M&A fence to understand the issues and make the most of the opportunities the EV market presents.