Early 2018 deals in the food and beverage sector

The first quarter of 2018 commenced with 36 deals1 in the food and beverage sector. Given 2017 concluded with a yearly total of 210 deals and 50 transactions in Q4, this represents a 28% fall in deal volume compared to the previous quarter.

The acquisition by Nomad marks a return to acquisitive growth, following a two-year period in turnaround mode and signifies a move into a complementary category in the frozen space. The transaction includes brands such as Goodfella's and San Marco, as well as the supply of private label frozen pizza to UK and Irish retailers. For Ranjit Boparan, owner of 2 Sisters, the divestment allows the loss-making group to use sale proceeds to repay debt and invest in the group’s core businesses.

With the acquisition of a stake in US-based Dole Food Company, Total Produce is now the world's leading fruit and vegetable group. It now has complementary market positions in various product segments and geographies with good synergistic potential. The cash consideration of $300 million for an initial 45% stake gives Dole a total enterprise value of circa $2 billion. It is anticipated that Total Produce will exercise its right to purchase the remaining shares in Dole within five years.

Domestic deals took the lion’s share of transactions in Q1 (58%), representing a softening of cross-border activity compared to 2017 (52:48 overall). Overseas buyers for UK/Irish assets in the quarter mostly originated from Europe and the USA. 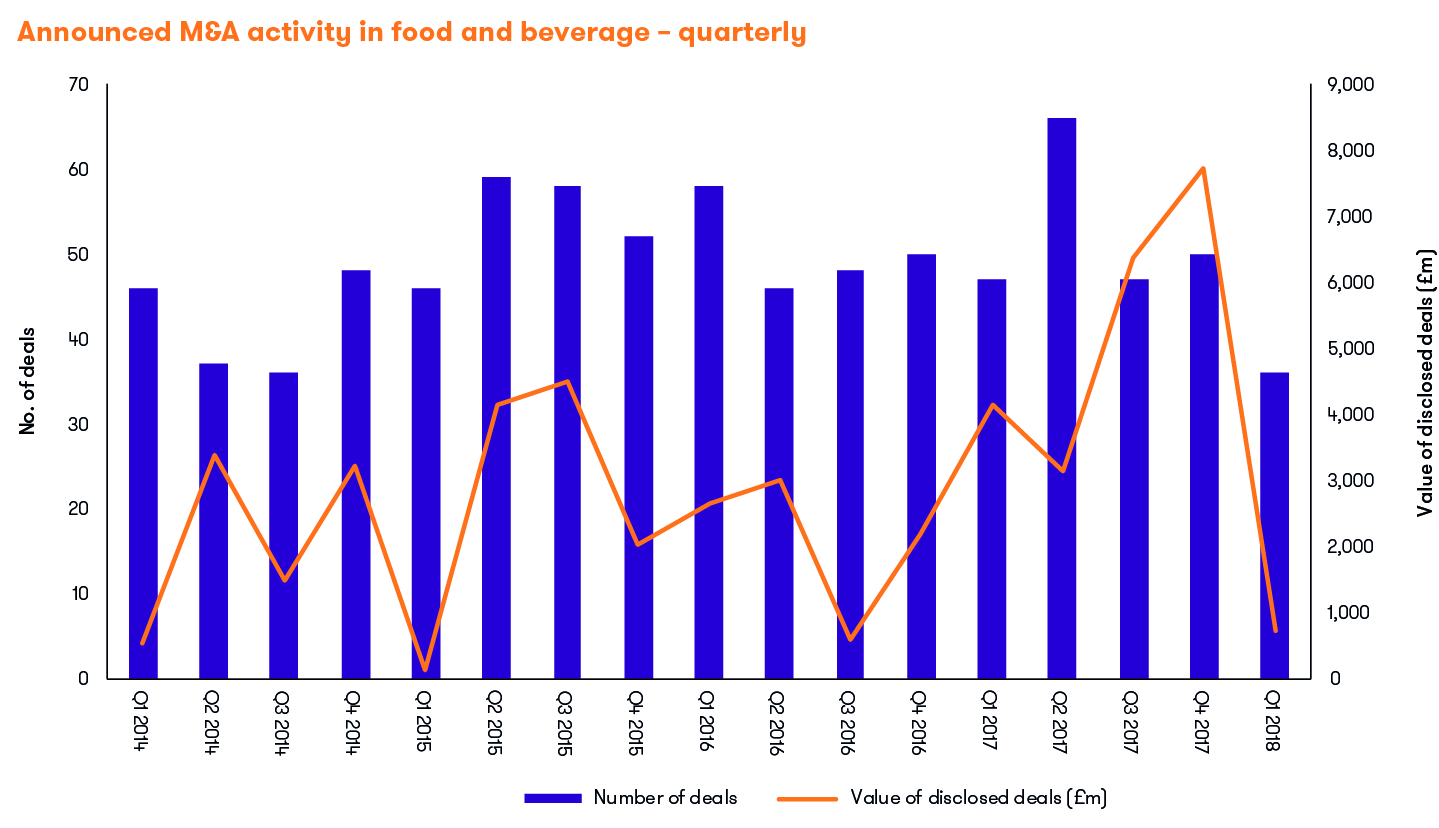 Transactions included Inflexion Private Equity’s acquisition of a 48% stake in Lintbells, a producer of nutritional supplements for pets. The premium/natural pet food market has attracted private equity's interest for several years. The UK market for pet supplements is currently a more immature and fragmented market, with robust prospects. The UK pet supplements market is reportedly worth circa £100 million and growing at 7% per annum as pet owners become more aware of the existence and effectiveness of such products. 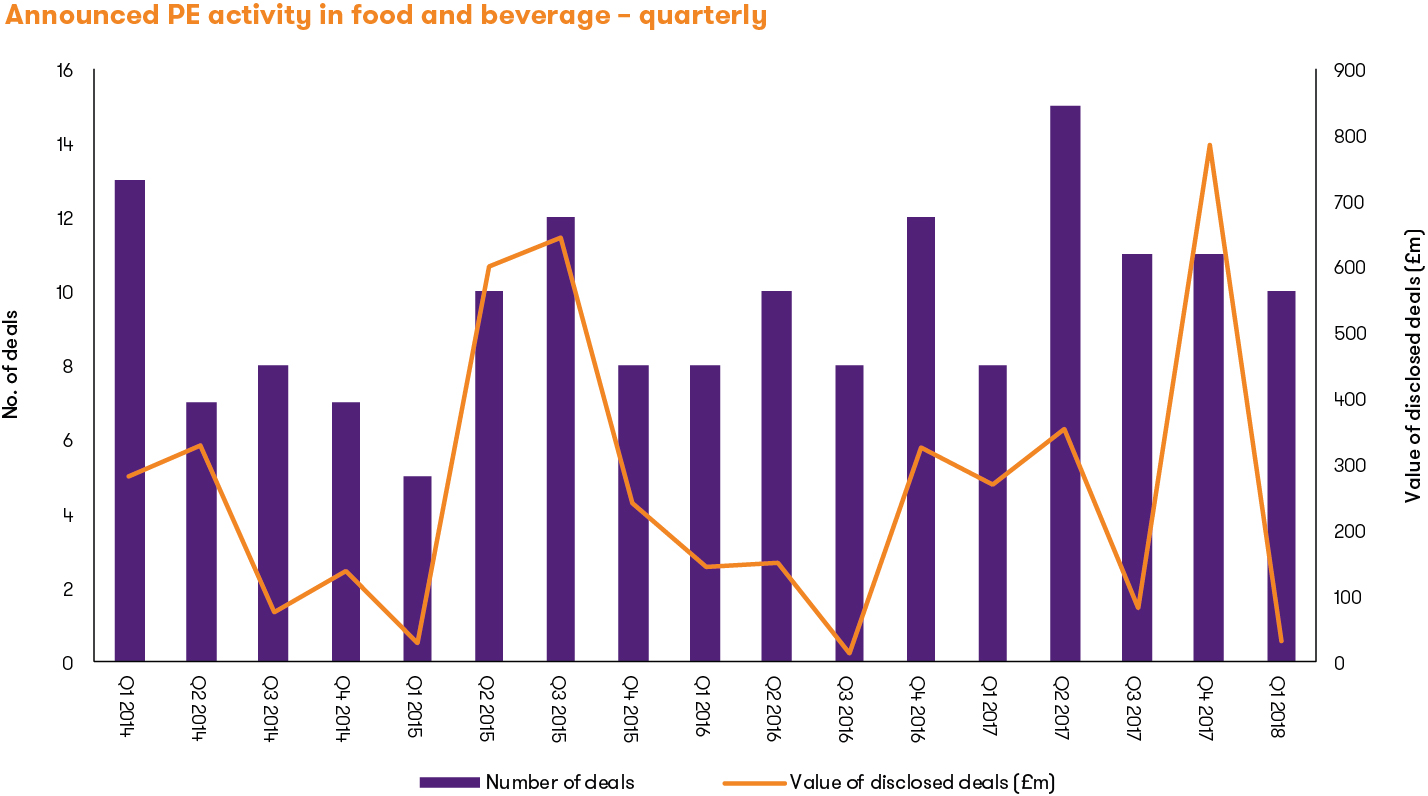 Consumer demand and M&A activity continue to grow in the healthy and premium snacking sectors.

In the growing nut butter sector, Northern-Ireland based SHS Group acquired 3V Group, the owner of Meridian Foods, one of the UK's leading nut butter producers as well as nut-based snack bars. The acquisition of Meridian diversifies SHS’s portfolio, representing its entrance into the nut butter and healthy protein sector. The acquisition also included the soft drink brand Rocks, which is complementary to SHS’s existing soft drinks portfolio (including Shloer and Bottlegreen).

Consolidation has also continued apace in the ingredients and foodservice sectors.

US-headquartered Sysco announced its acquisition of Kent Frozen Foods, which distributes chilled, frozen, and ambient food products to the catering industry. The business will continue to operate as an independent entity, alongside Sysco’s other UK businesses, including Brakes, Fresh Direct and M&J Seafood.

Perwyn LLP supported the MBO of Freshcut Foods, which supplies added-value vegetables, fruits and carbohydrates to foodservice operators and food manufacturers in the UK. Also in the foodservice sector, Reynolds acquired the business and assets of Solstice, a supplier of speciality fruit and vegetables, dairy and ambient products to the hospitality industry, in a pre-packaged administration sale.

In the ingredients space, Kerry has continued to expand its global footprint. It announced acquisitions in China of SIAS Food Co, a supplier of culinary and fruit ingredients and systems to China’s foodservice and food manufacturing industries. It also acquired South Africa-based Season to Season, a supplier of taste ingredients and systems to the African snack and food sectors. Also in Q1, Kerry established a foothold in the substitute meat market acquiring Ojah BV, an innovative Dutch producer of textured meat alternatives which currently exports to 21 countries.

The alcoholic drinks sector continues to be a prolific area of M&A activity in the UK, with five transactions recorded in the quarter.

Meanwhile, there were three deals in the spirits sector. Diageo acquired Belsazar GmbH, a premium aperitif from Germany’s Black Forest. The acquisition marks the first company to be acquired by Diageo through Distill Ventures. Distill Ventures is the drinks industry’s first accelerator for new and growing spirits brands to which Diageo provides funding. The acquisition of Belsazar bolsters Diageo’s presence in the aperitif sector, which is deemed an area of future growth as demand for lower ABV cocktails and long drinks are on the rise.