The Conservative party has won a strong majority in the general election. Boris Johnson is returned as prime minister with a clear mandate to proceed with Brexit and for the UK to leave the EU in seven weeks’ time, on 31 January 2020.

MPs will be working right up until Christmas

MPs will convene in parliament early next week (of 16 December), and are expected to sit until 23 December in order to debate and pass the EU Withdrawal Act, implementing the Brexit Withdrawal Agreement reached with the EU in October.

The Brexit agreement then needs to be approved by the European Parliament in the week of 13 January. If this goes through, then the UK will leave the EU on 31 January 2020 and enter an eleven-month transition period.

Tax and spend confirmed after Brexit

The chancellor will set out the government’s 2020 Budget in February or March, confirming tax rates for April 2020 as well as any additional 2020/21 spending (note most 2020/21 spending was confirmed in the spending review in September), and longer-term fiscal policies.

Key issues – what does this mean for business?

Brexit is most definitely going ahead now. The UK will formally leave the EU on 31 January, when it will enter a transition period during which little will change (however there may be a few international tax treaties and free trade agreements that do not automatically roll over to the UK).

Key dates for Brexit will be: 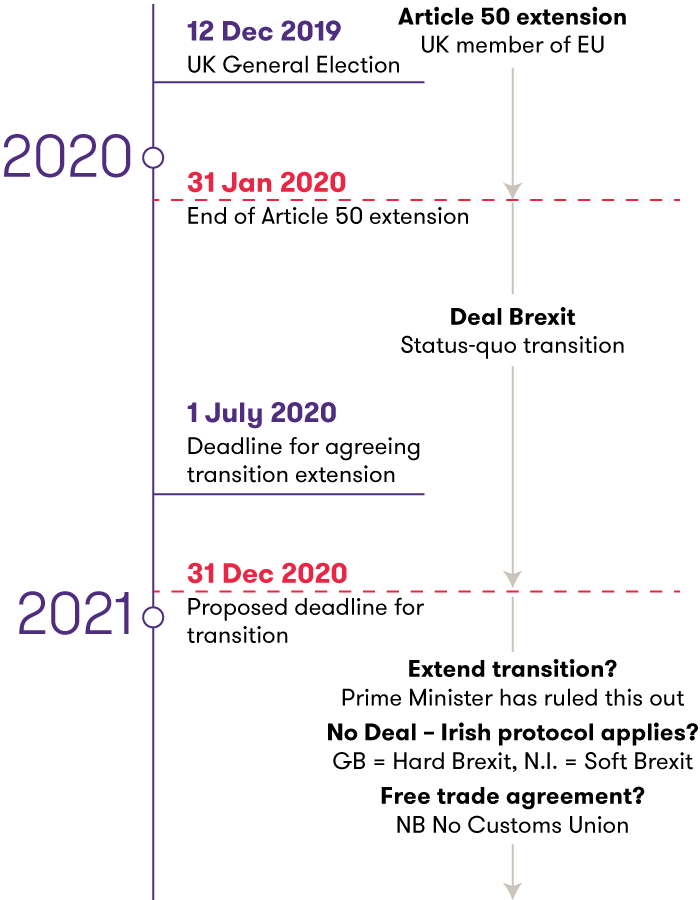 The prime minister has committed to a form of Brexit that would not involve a customs union with the EU. It would allow for the UK to set its own regulations, diverging from EU regulations. This will, as a minimum, entail new customs processes and paperwork, as well as some barriers to trade in services and goods. Whether or not tariffs on UK exports to the EU are included – and the extent of any non-tariff barriers to trade – will depend on whether the UK can negotiate a trade agreement with the EU within one year and the specific terms of such an agreement.

This implies a harder Brexit for England, Wales and Scotland (ie there would be significant trade friction).There would also be the possibility of no trade deal at the end of 2020, giving rise to trading on World Trade Organisation (WTO) terms akin to the ‘no-deal’ Brexit that businesses have prepared for over the last year or more.

In Northern Ireland, the Northern Ireland Protocol – part of the Withdrawal Agreement – will be in place. It will automatically come into force on 1 January 2021 and last for a minimum of six years.

We can also expect the new government to continue trying to negotiate trade deals with other countries. The government has said that, in parallel with EU trade negotiations, it would seek free trade agreements with the US, New Zealand, Australia and Japan – although it may not have capacity to negotiate with all these countries simultaneously.

This will be different to previous Conservative governments

The Conservative majority has won by gaining seats in towns in Wales, the Midlands and the north of England – constituencies that have been held by Labour for generations. The dynamics of Conservative policies will change as a result.

To retain these seats at the next election, the government will need to address the issues people face in these communities. The design and distribution of new regional funds (including a new national 'Prosperity Fund’) may be affected. We can expect an immediate focus on infrastructure in the Midlands and the North England, as well as increased spending on public services and investment (or trade protection) of industries in these areas.

This, in turn, could have knock-on effect in terms of the types of trade deals the government negotiates. It may cause the government to refrain from negotiating full-blown free trade agreements, for example, and may lead to additional measures to soften the impact of Brexit on UK manufacturing.

It may also affect fiscal policy. While we can expect limited changes to tax rates for business, if spending increases further towards the end of the parliament then there may be a need to increase taxes to pay for it.

What should business do?

Enjoy the holiday break, and focus on the following areas on returning to work in the new year.

Prepare for a hard Brexit on 31 December 2020, and take forward longer-term Brexit adaptations

We will have more certainty on Brexit than ever before. We now know that:

This all provides a good basis for implementing plans for Brexit, which should cover longer-term adaptation as well as compliance and business continuity actions.

What is your optimal operating model and market strategy post-Brexit? If you import or export goods, this should include putting in place now the customs processes you will need for January 2021.

Review your operating model, and work through all the tax implications of any changes to it. And, with the country expecting continuing skills shortages and a more restrictive immigration system, develop your reward strategy for global talent and skills development in your workforce.

Brexit is a long-term process, not a one-off event. It will involve the transformation of large swathes of the UK business environment, from spending programmes to trade policy, and from immigration to tax.

There remains a considerable amount of uncertainty around what these new post-Brexit arrangements will look like. Key areas will include future trade deals, regulation, and regional and industrial development programmes. Identify your priorities and seek to influence the shaping of these arrangements through trade associations and consultations, and talk to us.

As the government negotiates trade deals, develops regulatory regimes and implements new policies, identify the opportunities and how they should drive change in your business.

Watch out for global developments

History suggests that what will define this government will not be their manifesto commitments, but rather how they respond to external events. In 2020, we may see a growing trade war between the US and both China and the EU. This may prompt a global recession which, as the cyclical nature of the global economy suggests, is due to happen anytime from now.

Be prepared for global turbulence: cut costs, manage cashflow and continue to focus on how you offer value to your customers

We have extensive experience of helping our clients in all sectors navigate change. We can help you build resilience and agility, and prepare for Brexit.