2018 was a milestone year for deal activity in India, with the total deal value crossing the USD100 billion mark.

The level of corporate deal activity seen in India over the last year demonstrates the increasing depth and maturity of the Indian markets. Ongoing capital market and regulatory reforms and efforts to improve the ease of doing business in the country are clearly making India more attractive to investors.

Deal values across private equity and M&A transactions in 2018 reached a high of over USD110 billion from 1,258 transactions. The year also saw a record number of deals in the billion-dollar category, with a total of 18 such deals clocking up USD72.5 billion.

Domestic consolidation was a key driver of deals – primarily transactions in the energy sector – accounting for around 60% of overall M&A transaction value. This was more than 50% up on 2017.

Inbound deals accounted for around 30% of total 2018 M&A deal value. Walmart and Schneider were among the key global investors; this is expected to trigger further interest from overseas corporates and investors in 2019.

The surge in deal activity was mainly driven by companies seeking to buy technology, consolidate by expanding market share and diversify their market presence.

The telecoms sector led the pack, with 21% of total M&A deal values. Rapid growth in this sector was driven by the Indian government’s liberal and reformist policies as well as strong consumer demand.

While these core sectors attracted the big-ticket deals during 2018, upcoming sectors and start-ups drove deal volume. The adoption of disruptive technologies across verticals spanning education, food, health, hospitality and transport has encouraged established players to absorb budding companies and this is driving deal activity.

Cross-border deal activity with Europe surged during 2018, including both strategic deals and cross-border investments. A total of 43 deals, valued at USD4.4 billion were recorded – an 8% increase in volume and a whopping 212% increase in value compared to 2017.

On the inbound front, 18 deals were recorded with a cumulative value of USD3.6 billion. Outbound totalled 25 deals worth USD811 million.

Looking ahead, while the European Union (EU) referendum vote in the UK has shaken investor confidence and will continue to bring uncertainty to the market, the corporate mid-market M&A space remains robust, with deal makers considering incremental M&A opportunities post-Brexit.

The EU adopted a 'Joint Communication' in 2018, which sets out the EU's strategic vision to strengthen its partnership with India. This is likely to result in a potential surge in M&A deals between India and Europe over the coming months. 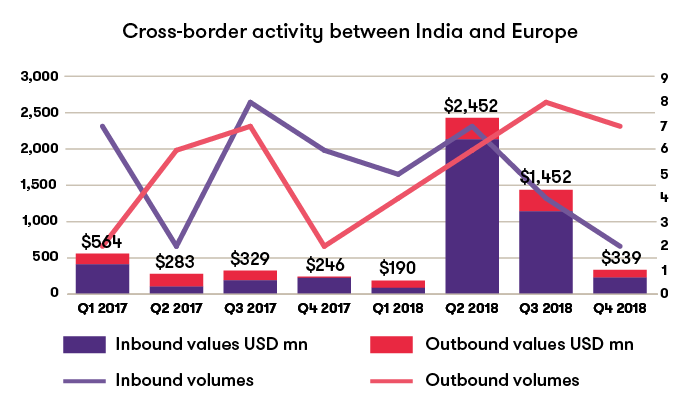 Inbound deal activity recorded a 3.8x increase in values compared to 2017, while volumes declined by 22%. The surge in deal values was driven by four big-ticket transactions: two billion-dollar deals and two deals estimated at over USD100 million each. Overseas acquisition was dominated by acquirers from Germany and France, with five and four deals each, valued at USD89 million and USD3.1 billion respectively.

The manufacturing sector led deal activity both in terms of volume (five deals) and value (USD2.2 billion). Most of this activity was in the capital goods segment of the sector. The start-up, IT, energy and banking sectors also witnessed increased deal activity during the year.

Indian overseas acquisition experienced an upward trend both in terms of deal value (69%) and volume (47%). The highest number of deals were executed between India and Germany, with seven transactions valued at USD158 million, followed by the UK with four deals valued at USD177 million. France and Switzerland executed three deals each, valued at USD201 million and USD10 million respectively.

Private equity investment on par with 2017

Despite a tepid start to the year, private equity (PE) activity ended the year on par with 2017, with USD20 billion invested during 2018 clearly showing investors’ confidence in India.

The Indian PE landscape was backed by a steady stream of investments and mounting levels of ‘dry powder’ in the form of pent up capital.

Apart from Indian private equity and venture capitalists, a number of global investors showed interest in the activities of home-grown start-ups. These investors pumped large sums into the system to further capitalise their activities – resulting in start-up deal value doubling compared to 2017.

2018 also witnessed an increased focus from global sovereign, pension funds and conglomerates in Indian assets, particularly in the consumer and infrastructure spaces.

The start-up sector continued to be the PE investor and venture capitalist’s favourite sector, increasing investment value by 2.4x and volume by 3%.

Banking and ecommerce took the biggest share of investment volumes, while reforms like the Real Estate (Regulation and Development) Act 2016 are helping the real estate sector to become one of the fastest growing sectors and attracting PE investors.