A growing economy and continued efforts by the government to remove regulatory hurdles and attract foreign investment continue to drive deal momentum in India.

The value of corporate deals in India has doubled in the year to date compared to 2017, driven by big ticket consolidation across various sectors. There have already been 10 billion-dollar deals this year, capturing 74% of total deal value, with deal volume more muted.

M&A is expected to gain further momentum following amendments to the insolvency and bankruptcy codes recently passed by the Indian parliament. This is likely to result in a number of distressed assets coming up for sale at attractive valuations, particularly in capital-intensive sectors such as real estate, infrastructure, power and cement.

Deal activity is also likely to be boosted by India’s ‘Housing for All’ scheme, which should have a multiplier effect across the value chain, as well as the growth in credit as a result of the recapitalisation of public sector undertaking (PSU) banks, along with non-performing asset (NPA) resolutions.

The Securities and Exchange Board of India’s recent announcement of a reduction from five to three in the number of years of financial information that need to be provided will give impetus to IPO activity.

A strong capital market and regulatory reforms, including the new insolvency law, are signs of increasing depth and maturity, making the Indian market more attractive.

2018 to date has been a breakthrough year for the Indian market with its highest ever half yearly deal tally of USD75 billion across 638 transactions, almost double the deal value witnessed in the same period last year.

In addition to 10 deals in the billion-dollar category, there were 52 deals with an estimated value above USD100 million each, which together contributed 93% of total deal value.

M&A driven by both domestic and cross border deals

In all there were 235 M&A transactions clocking USD65.5 billion in H1 2018, over twice the deal value for the same period last year. A favorable local deal environment saw momentum most pronounced on the domestic front, with USD41 billion worth of transactions across 140 deals for the year so far.

This surge in deal activity was driven by domestic companies’ focus on scale and market expansion in light of growing competition, and by efforts to optimise capital structures.

Inbound deal activity has witnessed a whopping 6.4-fold increase in value compared to H1 2017, primarily driven by the Walmart-Flipkart deal valued at USD16 billion. Even barring this deal, inbound deal value is up 61% on the same period last year.

Walmart's late stage buyout of Flipkart underscores the evident maturity of the Indian e-commerce ecosystem and is expected to strengthen investment sentiment in e-commerce and start-ups. Manufacturing, banking & financial services and information technology were other sectors with noticeably increased level of activity in H1 2018.

The telecom sector continued to consolidate in line with the trend seen over the last two years, with five completed deals valued at USD18.9 billion. Energy & natural resources (including cleantech) was another sector which saw a significant jump in deal values, with a couple of transactions in the billion-dollar plus category.

Overseas corporate buyer activity picked up as India continued to be a focus for investment in emerging markets, driven by consolidation, restructuring and asset sales by highly-leveraged Indian companies.

German and French companies showed great confidence in the Indian market, executing five deals (worth USD89 million) and three deals (worth USD2.1 billion) respectively. The manufacturing sector attracted the most attention from foreign investors, with four deals worth USD2.2 billion, while the potential of Indian start-ups was also showcased by three deals worth USD15 million.

Indian companies have been making their presence felt through a number of successful greenfield investments and landmark acquisitions. Indian brands have proven their global competitiveness by expanding into new territories during H1 2018, with 10 outbound transactions valued at USD402 million, a strong 24% increase on H1 2017.

In contrast to last year, Indian acquirers showed renewed interest in the automotive, manufacturing and energy sectors, which together contributed 93% of outbound deal value. 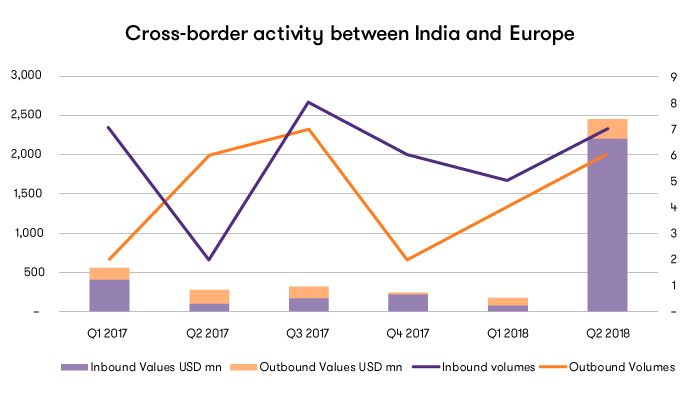 The first six months of 2018 have also been record-breaking for private equity (PE) deals, with over USD9 billion in transactions, a 12% increase on H1 2017.

This was largely down to big value deals valued at over USD100 million, mainly due to increasing interest from pension funds, sovereign wealth funds and global buyout funds in India.

We expect this momentum to continue on account of increased competition, the massive amounts of ‘dry powder’ in the form of pent-up capital to be deployed and encouraging government initiatives like incubating tech funds, among others.

After a steady fall in investment since H1 2015, the real estate sector saw the greatest level of activity in terms of deal value, with over USD2 billion of investment, followed by the start-up, energy and banking sectors, which each attracted high values investments.

Investors have shown unprecedented faith in Indian start-ups, with Paytm Mall, Swiggy and Policybazaar all entering the unicorn club of businesses valued at over USD1 billion. As a result, investment in start-ups has doubled compared to H1 2017.